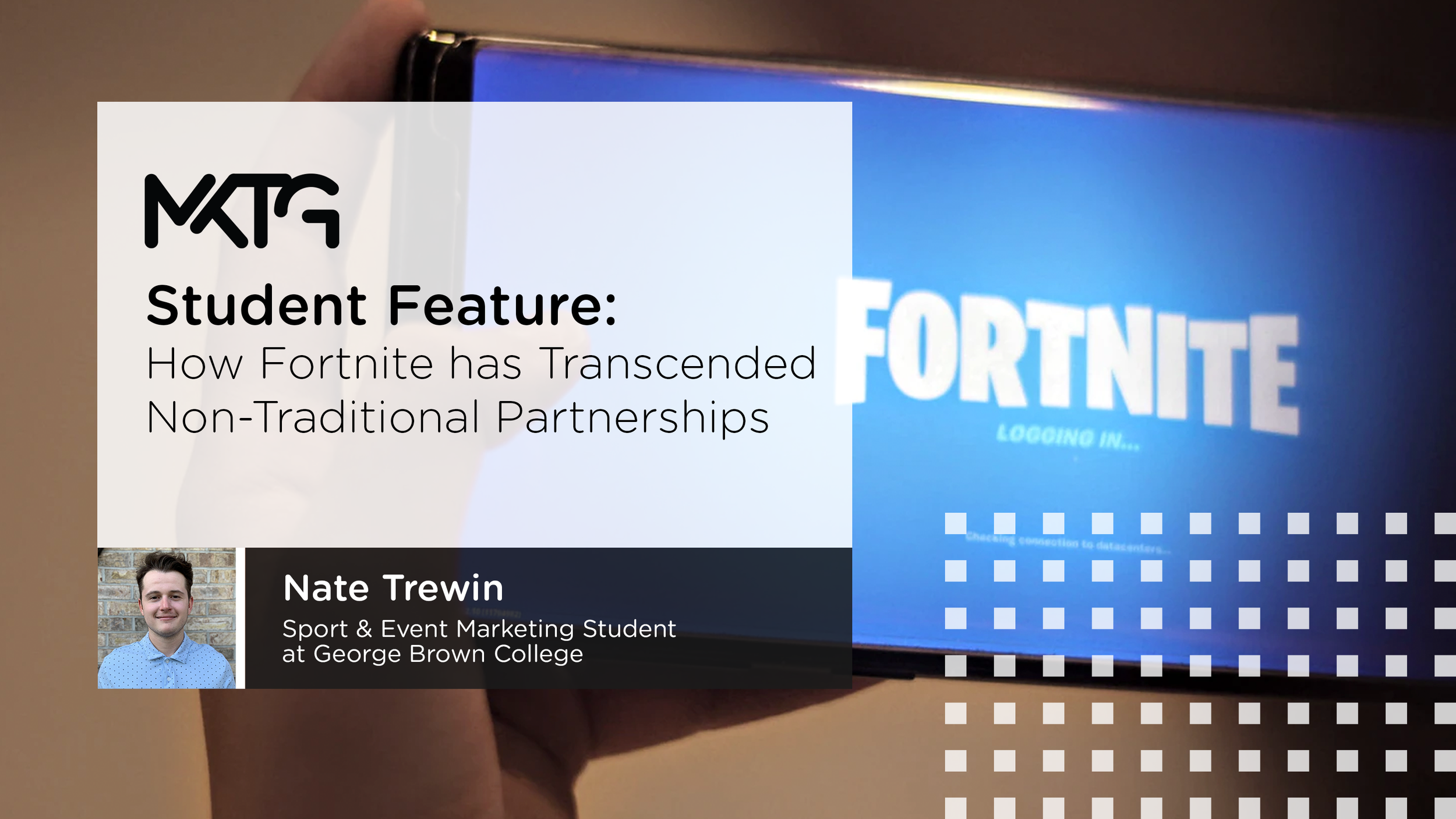 Nate is a natural born competitor.  Growing up he played many sports, such as hockey, golf and badminton.  However today, this competitive drive has led to the world of gaming.  In his free time, he finds himself watching tournaments on Twitch or playing Fortnite or Valorant.  Nathan is excited about the growth and potential of Esports in the industry.  Nate is currently completing her post-graduate in Sport and Event Marketing at George Brown College.

Fortnite is an online Battle Royal video game designed by Epic Games, released in 2017.  It is a cross-platform game which means that players on different consoles (e.g. Nintendo Switch, Xbox and PlayStation,) PC and Mobile can all play with each other.  Players fight other players individually, in duos, trios or squads in 100 player lobbies with the aim of being the last person or team standing. What makes this game unique is that players can also destroy objects around the map in order to gain materials which allows them to build structures to defend themselves.  As the game progresses onward, there is a storm that decreases the size of the map, so players come closer together, making the game an even more unique experience for gamers.

Since its release, Fortnite has become massively popular, ingraining itself within popular culture.  The game is widely recognized around the world with 350 million registered players as of May 2020.  Although numbers are most likely heightened due to COVID-19 Fortnite has always had a colossal number of players due to its sheer popularity. With a high brand awareness, Epic Games has used Fortnite to transcend the way we look at non-traditional marketing /sponsorships in the gaming industry.

This blog will outline why Fortnite is so popular and how it changed the we look at sponsorship in video games.  This will be explained through how Fortnite has intersected cultures, its non-endemic partnerships of movie franchises, music, athletes, charity events and lastly the creation of a new space in the game.

The game really became popular through the crossing of worlds.  It was in 2018 when streamer Ninja (Tyler Blevins) played a squad match with rappers Drake and Travis Scott and NFL wide receiver Juju Smith-Schuster.  This stream went viral and it had 635,000 concurrent viewers.  This stream truly represented a crossing of worlds with gaming, music and pro athletes in one culturally-driven interaction.  I believe that it symbolized the true beginning of Fortnite’s current and projected growth in popular culture.

Fortnite has done a spectacular job when partnering themselves with non-endemic brands that have important roles in popular culture.  Two examples of this can be seen through their partnership with Marvel, and Star Wars.  For Marvel, Fortnite introduced a game mode titled “Fortnite Endgame”.  This feature was a limited time game mode but allowed players to collect Avenger items to try and defeat Thanos.  This also coincided with a Marvel skins (the different cosmetics that players can wear while they play the game) that gamers could purchase.  This is also true with the brand-new season of Fortnite where the additional skin included is Jason Mamoa’s Aquaman.

Fortnite seems to be the game of choice for charity esports events.  It is a game that is played by streamers however many athletes play it in their spare time.  This makes it a popular game of choice when it comes to bringing the worlds of sports and video games together for charity. In January 2020 the Twitch Streamer Bowl was an incredibly successful event in which Twitch streamers were paired with NFL Athletes to play Fortnite Duos.  This tournament raised $500,000 for the charities of the players who participated’s choice.  Another charity sports event was the recent Fortnite tournament with the Australian Football League (AFL).  The May 22nd event featured 40 AFL pros as well as 40 of Australia’s best professional Fortnite players.  The grand prize was a $100,000 donation to the charity of the winner’s choice.  Another recent example of a Fortnite charity tournament was in association with the NHLPA.  This tournament prize was $200,000 for charity. It consisted of 80 hockey players with 65 of these being NHL players.  The Fortnite playing format was trios and there was representation from 28 different teams

It is clear to see the popularity that Fortnite has amongst famous athletes and has been an effective tool for engaging athletes in quarantine, as well as for raising money for charity.

Building on the success of their first in game concert in February 2019 which featured Marshmello, and reached 10 million viewers, Fortnite has expanded this component of the game in 2020.  Most recently, Fornite partnered with popular rapper Travis Scott.

The partnership included series of five in game shows that acted as a concert.  It featured a giant digitized Travis Scott who performed a set list while payers bounced around the map.  This partnership also included in game purchases, a consistent element with Fortnite’s brand partnerships, perhaps for its success with driving revenue in-game.  Real life merchandise such as t-shirts, hoodies and action figures were also available for purchase on Travis Scott’s website.  Travis Scott used the event to tease his new song “The SCOTTS” that released to the public at midnight the same night. The numbers for this event was off the charts. The first show featured over 12.3 million concurrent viewers.  Overall, a total 27.7 million unique players participated in the shows, but the number of total viewership in-game reached live 45.8 million times across all 5 show times.  This shows that multiple people viewed the show more than once.

These numbers show the reach that Fortnite has with its non-endemic partnerships.  Fortnite has benefited from partnering with brands, or athletes who already have a huge following themselves.  It is truly a colliding of worlds, and the convergence of two different passionate groups creates a colossal intersection of passions.

In early May, Fortnite created a new game mode titled “Party Royal.  This was a new area in the game in which no weapons could be found.  It is an area where players can team up with friends and have fun without having serious competition with other players.  Their intentions are for players to have fun with these new modes.  Here, players and have fun with friends, play fun games, watch live events and attend shows.  This island was introduced with a test event which saw Jordan Fisher host while Diplo performed his Major Lazer set.  This test event went very well as the premier show had Dillion Francis, Steve Aoki, Deadmau5 and was MC’d by Jordan Fischer.  More recently a new trailer for Christopher Nolan’s new movie titled Tenant was shown in Party Royal and there are plans to show the movie in its entirety upon its release.

This space presents so many opportunities for Fortnite to grow and expand.  With some brands worried about violence in video games, this is a space that could see so many new sponsorship opportunities.  New online concerts, more song sneak peaks, or more trailer premieres.  Brands could use this space to promote themselves to the millions of people who play Fortnite or attend these events.

FOLLOW US ON Instagram @mktg_canada TO KEEP UP WITH US as we talk about sports, culture, and world events. 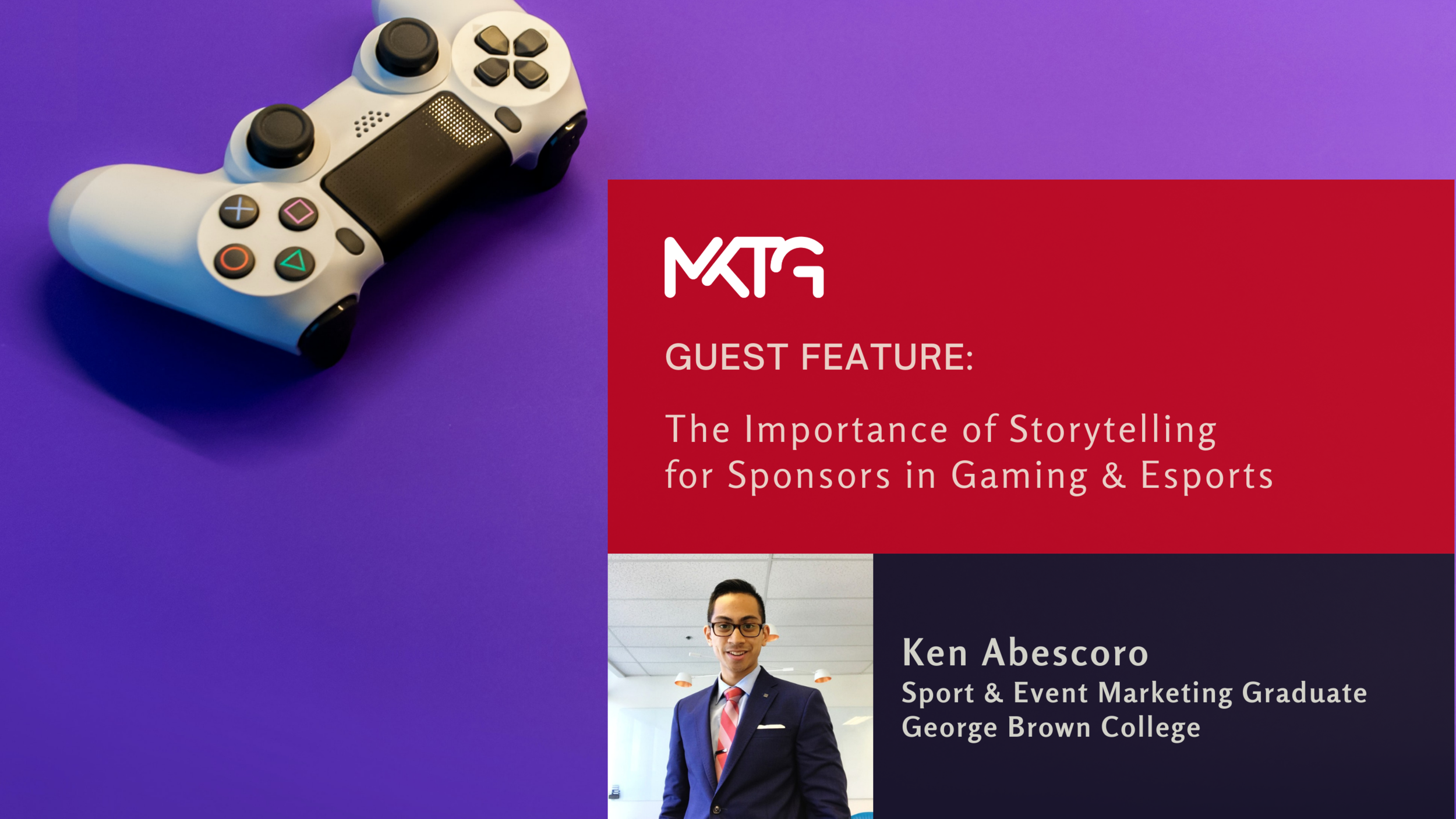 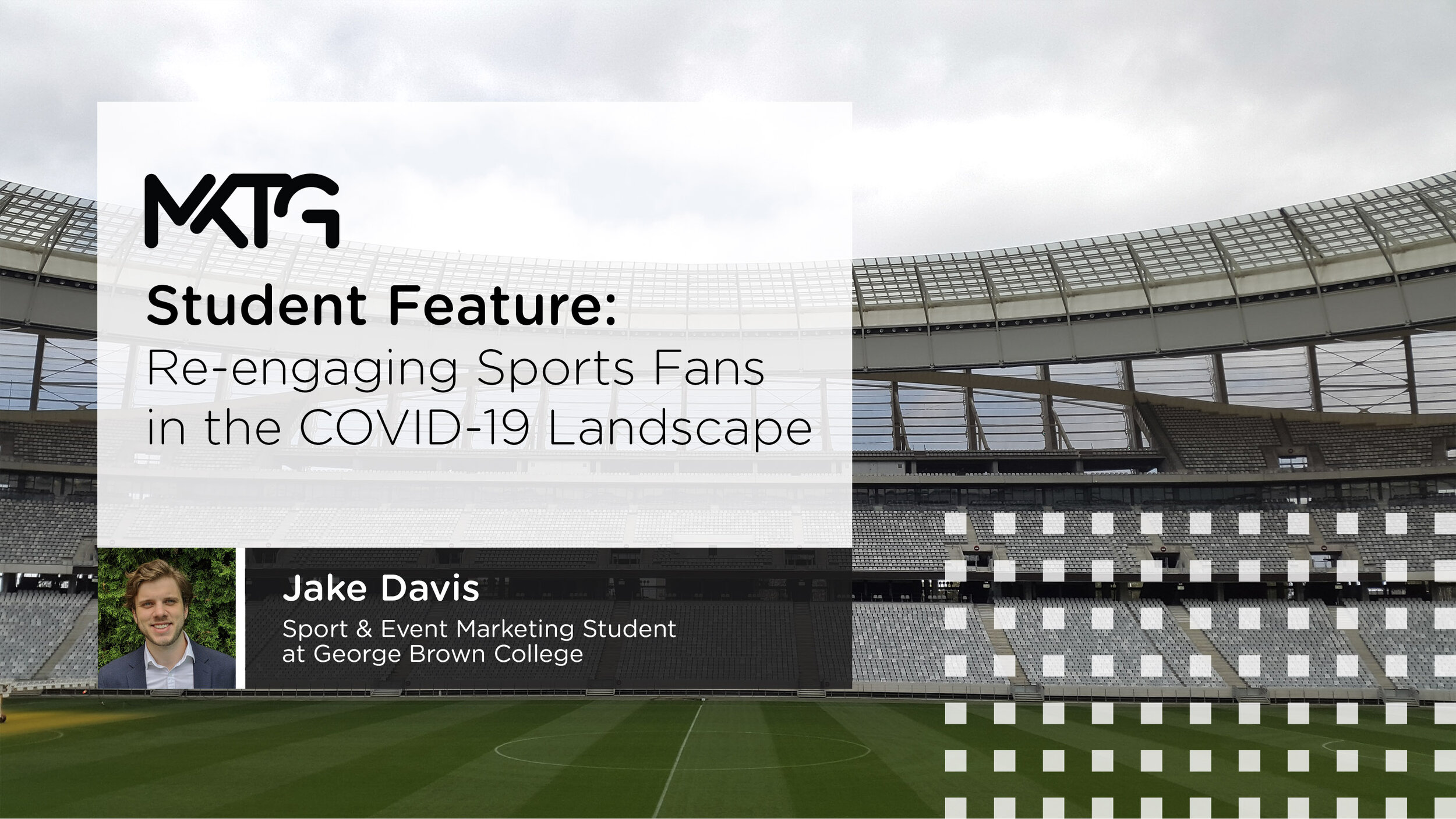 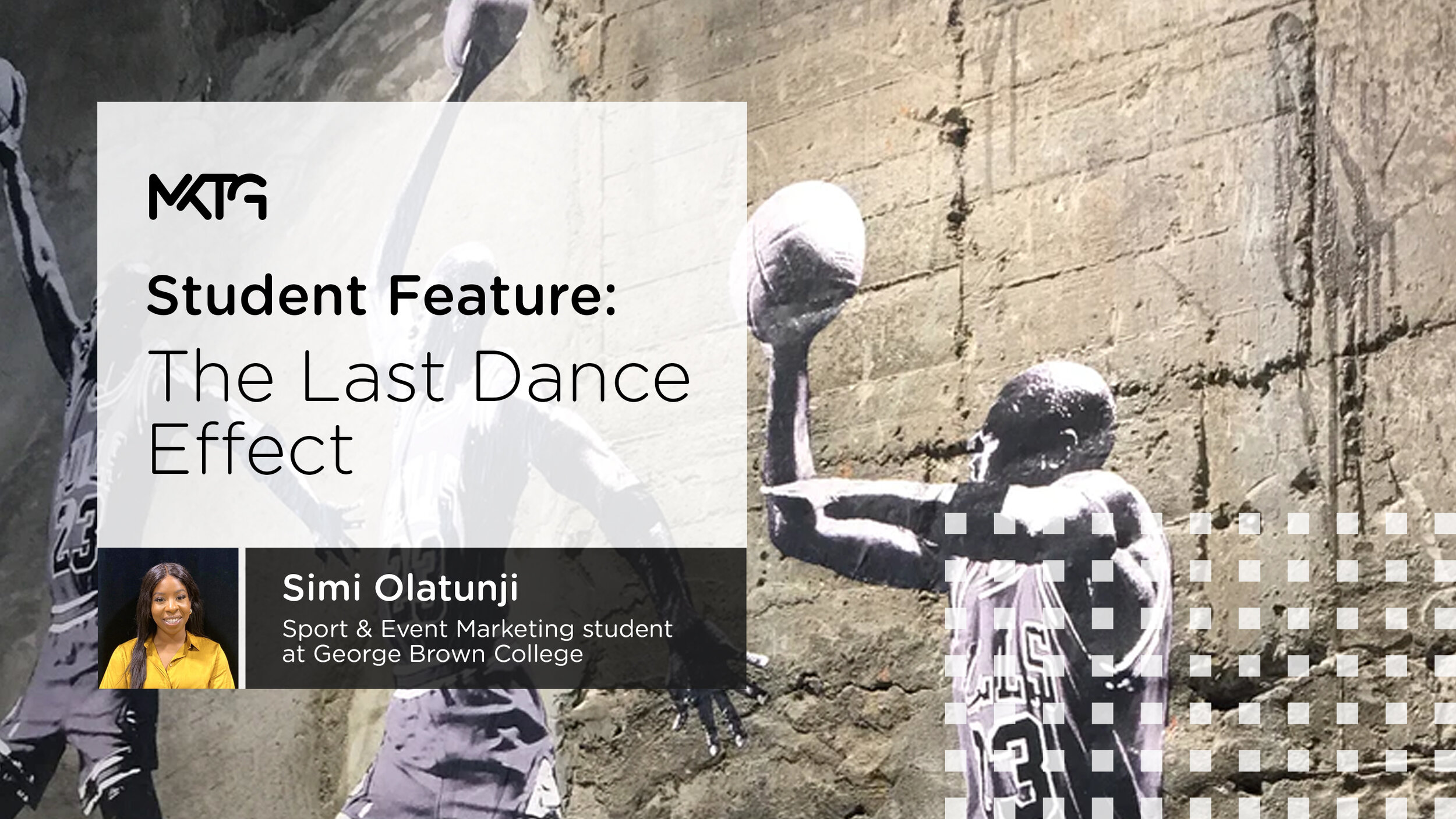 May 21 The Last Dance Effect